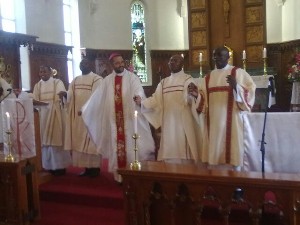 “From today on wards, the Catholic Church will never be the same”, so i told my facebook friends after my ordination. Some got me wrong and thought i was being proud or arrogant. Is it not true that when a family has a new born child, then there is hope that the child will eventually change the fortunes of the family? This is indeed the spirit in which i uttered that seemingly doggy statement. The 29th of September 2011 was the turning point of the life of the diocese of Mthatha. For the first time ever, the diocese was blessed with three indigenous deacons ordained for the diocese and one CMM deacon.

In this article, i would like to share with our dear readers about the feelings and the thoughts that overcrowded us on the occasion of our ordination. The first obvious feeling is that of joy. Naturally, there is a feeling of fulfilment and joy when  one gets to see the fruits of his hard labour. We were filled with joy because having been at the receiving end of the rich heritage of those who have gone before us, the Church is presenting to us a great opportunity to contribute towards her growth and sustenance no longer as lay people but as part of the clergy. It is therefore not only the thought of being associated with the Church with such a rich heritage that filled us with joy but it is also about the opportunity to continue to water the seed planted by those who came before us. As mentioned by the bishop in his homily, the deaconate ministry was initially instituted for the social needs of the Church and it is our duty, first and foremost, to ensure that the social needs of the faithful are taken care of while we also do not neglect their spiritual needs.

While we are filled with joy at the thought of serving God as deacons, we are also aware of the challenge that lies ahead of us. Times have changed and the society has become very anti-Catholic. A lot of allegations are made against the servants of God. This brings anxiety to us. We, however, are motivated by the fact that life has taught us a few lessons. We know for example that men who climb mountains are useful: they teach us to conquer our challenges. To reach the summit of Everest, climbers had to undergo incredible hardships. Accepting the challenge of the highest peak in the world. They carefully planned their ascent, tried and failed. They planned again and tried anew, making use of the experience of previous attempts:  they steeled their wills and hardened their bodies through exercise: they were numb , as it were, with cold, dog-tired, beaten by the wind, oppressed by the high altitude. Still, they continued in their endevour until they finally won. Motivated by this life experience, we are ready to stand up to the challenges that await us. Like the bishop said in his homily, “ we are not mere people who go around uttering slogans but we are people who have an indepth relationship with the Lord.” This is what will keep us going. Knowing that we have a strong bond with the Lord. A bond that is only strengthened by prayer.  The heavenly hosts were invited at our ordination as we prostrated in front of the sanctuary at the singing of the litany of all the saints and therefore with the saints and the angels on our side, whom shall we fear? Before whom shall we shrink? We thank the Lord who has called us to serve Him in this incredible Church. May He be our source of strength throughout our life of service.

History made in Mthatha

For the first time in the Diocese of Mthatha 4 deacons in view of priesthood were ordained at the closing of the 3 days Diocesan Pastoral Council Meeting on 29th September 2011. The first three, from left to right, namely Thembalethu Sandondo, Luthando Xhamlayo, and Motlatsi Phomane were ordained for the Diocese, while the George Kageche on the far right was ordained for the Missionaries of Marrianhill. The families of the ordinants, one from the end of the Diocese in Matatiele, one from the middle of the Diocese in Maclear and one from the threshold of Mthatha in Ngqeleni as well as the adopted family of Rev. Kageche who hails from Kenya were present.

In his homily Bishop Sipuka noted how the new deacons, having been ordained on the feast of the Archangels were to imitate the Angels in their ministry. Just as Angels serve and provide in God’s name, so are they as deacons called to serve and provide for the poor in God’s name. Just as the Angels especially St. Raphael, healed Tobit from his blindness, so are they as Deacons called to heal people in their various forms of blindness and sickness, and finally just as Angels are sent as messengers, so are the Deacons God’s conveyers of God’s deep message to His people.

Rev. Xhamlayo speaking on behalf of the newly ordained Deacons said while they were filled with joy at the thought of serving God as deacons, they were also aware of the challenge that lies ahead of them, but relying on spiritual power he said they were ready were ready to stand up to the challenges that await them. “Like the bishop said in his homily, we are not mere people who go around uttering slogans but we are people who have an in-depth relationship with the Lord. This is what will keep us going, knowing that we have a strong bond with the Lord, a bond that is only strengthened by prayer”, said the Reverend.

Verse of the Day

Humble yourselves before the Lord, and he will lift you up. — James 4:10